Cracking the Beatitudes – Blessed are the peacemakers, for they will be called children of God.

Blessed are the peacemakers, for they will be called children of God.

When was the last time you thought of the war in Syria? Or that in Afghanistan? Or in the Central African Republic? Does the conflict between the Israelis and the Palestinians still touch you at all?

Some experts hold that with the number of conflicts that are going on in all areas of the world, we are already in the Third World War. Besides inordinate suffering to millions of peoples, this also means immense business opportunities for those involved in the manufacturing and selling of all sorts of arms. 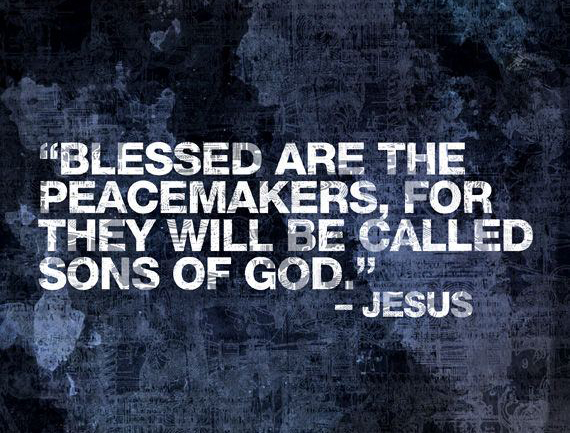 Peacemaking is a task

Jesus calls blessed those who make peace. Not merely those who choose to live in peace, sometimes perhaps in an individualistic way, just minding their own business. Nor those who reconcile themselves with their enemies, but those who actively make peace.

Just as wars and other conflicts do not come about spontaneously, so also peace does not just happen, it demands hard work –  the forces in favour of war and violence are huge indeed.

Peacemakers value peace so highly that they are ready to risk their personal peace and work hard to restore peace where it is absent. There are all sorts of reasons and feelings to convince us that it is useless to try, that it is too complicated and that you will end up just getting sucked up in the violence you are trying to remove. The true peacemaker is the one who is capable of going beyond all this.

Peacemaking through the Cross

Once again we see that the beatitudes speak about Jesus, the model peacemaker. He is the one who brought peace between God and humanity, between Jews and pagans. That is why all peacemakers are blessed, and will see God, because in this they are similar to the Son.

St Paul tells us that Jesus made peace ‘by the blood of his Cross’. When Jesus appeared to his apostles on Easter Sunday, he told them, ‘Peace be with you.’ ‘After he said this, he showed them his hands and his side’: the peace he gives them was achieved through his wounds.

Peacemaking is needed at all levels of human life, not only between states, but between persons and within families too. Today I will try to open the eyes of my heart to such situations, and will do my best to deserve the name of peacemaker.

Today’s extra aid is the eternally beautiful sung prayer of St Francis ‘Make me a Channel of Your Peace’, filmed in Assisi and sung by Angelina.

2 Cor 5: 17-21: 'Therefore, if anyone is in Christ, the new creation has come: The old has gone, the new is here! All this is from God, who reconciled us to himself through Christ and gave us the ministry of reconciliation: that God was reconciling the world to himself in Christ, not counting people’s sins against them. And he has committed to us the message of reconciliation. We are therefore Christ’s ambassadors, as though God were making his appeal through us. We implore you on Christ’s behalf: Be reconciled to God. God made him who had no sin to be sin[b] for us, so that in him we might become the righteousness of God.'